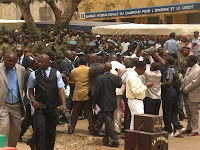 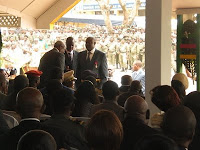 Dr. Kollo Basile Invited To Change Nkongsamba
The Government Delegate to Nkongsamba City Council, Dr. Kollo Basile, was officially installed into his new functions by the Minister of State for administration and decentralisation, Marafa Hamidou Yaya, on the 4th March 2009. In a welcome address by the representative of municipal council mayors, El Hadj Oumarou, he said Nkongsamba is composed of three sub divisions and three councils. He enumerated the tasks to be accomplished by the new government delegate which included the amelioration of road infrastructure, installation of street lights, reconstruction of the municipal market, fight against unemployment, improvement of hygiene and sanitation with assistance in the maintenance of security. In brief, Nkongsamba must change, the Mayor of Nkongsamba 1st Municipal Council echoed.
He added that the population of Nkongsamba was waiting anxiously for a dynamic government delegate like Dr. Kollo Basile with a lot of leadership capacities. With this, the mayors promised to lend him a hand to facilitate the execution of his duties.
The Minister of State Marafa Hamidou Yaya on his part expressed gratitude for the confidence the head of state and president of the republic, Paul Biya, attached on the person of Dr. Kollo Basile by appointing him as the first government delegate of Nkongsamba.
The minister announced projects which the government has put funding at the disposal of the Nkongsamba City Council for execution. He called on the Nkongsamba to put aside their indifferences and join hands with the new government delegate for the development of the city.
The government delegate was invited to undertake reforms that would modernise the urban plan of Nkongsamba. Dr. Kollo Basile is an experienced public service civil servant, who has occupied important position in the ministry of public health, starting with provincial delegate for health in the Littoral, Director of Community Health at the Ministry of Health, Chief of Cooperation Division at the Ministry of Health and Director of Human Resources.
By the time of his new appointment, he was also a lecturer at the University Centre for Health Sciences, CUSS, in Yaounde. With the elegant profile presented by the minister of state for territorial administration and decentralisation, all who turned out for the official event in Nkongsamba, said Dr. Kollo Basile is the right person at the right place.
The mass event was watched by the Littoral Governor, all the senior divisional officers in the Moungo, all the sub divisional officers in the Moungo, all the three municipal council mayors and a host of former colleagues and friends of Dr. Kollo Basile from different parts of Cameroon.
This page has been brought to you by Cameroon Link. For more, click on http://cameroonlink.blogspot.com
Posted by Camlink Men's Initiative at 12:07 AM 1 comment: 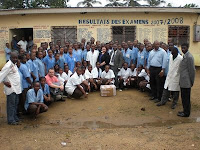 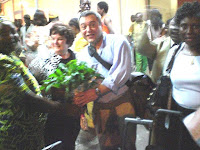