By James Achanyi-Fontem, ARRPA Cameroon
Cameroon is participating in an African Rural Radio Program Analysis (ARRPA) Initiative organized by Farm Radio International (FRI), a Canadian based charitable organization that supports broadcasters in meeting the needs of local small-scale farmers and their families in rural communities.FRI is supporting and implementing an investigative research program, ARRPA in five African countries namely: Cameroon, Ghana, Kenya, Malawi and Tanzania. Tchetta Meli Evariste Rostand just returned from Arusha, Tanzania, where he participated in a face-to-face workshop on the use of the tools for the investigation following an online course facilitated by Bartholomew Sullivan based in the FRI Africa regional office.
The face–to-face training was coordinated by Doug Ward, the chair of the Board of Directors of FRI in the presence of the executive director, Kevin Perkins and his collaborators in Canada and Africa. The research project aims at discovering and documenting the farm radio programming continuum in order to understand all the key processes that take place at the radio station level in researching, producing and broadcasting radio programs for small-scale farmers. For 30 years now, FRI has been producing and distributing radio scripts in order to help radio stations create better programs for listening farmers, and more recently FRI has been sending out the Farm Radio Weekly news and information services. One of the questions that ARRPA seeks to answer is, “to what extent and how are these services used by broadcasters, and can they be enhanced or supplemented with additional resources in order to make a stronger contribution to the production of effective radio services for small-scale farmers?
During the face-to-face workshop in Arusha, Tanzania, the FRI Chair emphasized on
specific objectives of ARRPA:
To understand and document how radio stations go about producing and airing farm radio programs.
To document how FRI’ scripts, newsletters and other resources have been used in the stations’ farm radio programming.
To find out how to make our support services more useful to broadcasters in farm radio programming.
In working towards these objectives, FRI is partnering with four radio stations of different typologies producing and airing programs for farmers in the five African countries that are interested in the investigations. In Cameroon, Tchetta Meli is visiting five station: CRTV Littoral in Douala, Lebialem Community Radio in Menji, Radio Bare Bakem in the Moungo, Radio Yemba in Dschang and Radio Medumba in Bangangte for the investigation. The ARRPA initiative in Cameroon is piloted by Cameroon Link, that has been a partner of Farm Radio International for over 20 years.
It is expected that ARRPA will enable FRI determine what services are more useful to African broadcasters / radio stations and how best to support them in meeting the needs of local small scale farmers. Findings of the study will also inform FRI on the development and implementation of innovative farm radio services for smallholder farmers in line with its 2011-2015 strategic plan.
For more information, please visit the web site of Farm Radio International at- www.farmradio.org
Posted by Camlink Men's Initiative at 1:27 AM No comments: 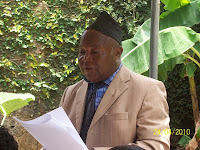 The on-going Commonwealth of Learning Open Distance Programme in Lebialem Division has targeted women and youths of Azi Traditional Head Quarters as appropriate community outreach channel. This was revealed during a workshop organized by the Commonwealth of Learning Cameroon Link Partnership for some 30 participants drawn from various professions including media, community development, health, education, agriculture, social welfare, animal rearing, traditional leadership representation and high school students.
The outreach Commonwealth of Learning programme in Lebialem is using community radio to design education and information productions on mother and child health care issues with the participation of local communities.
During the workshop at Ema Azi Palace in Lebialem, chaired by His Royal Majesty, Fon Njifua, epilepsies, mental disorder, sickle cell disorder and problems faced by albinos were included on the agenda as new public health awareness areas of concern in the region. Some mothers attribute these problems to witchcraft due to ignorance and lack of sufficient information.
His Royal Majesty, Fon Fontem Njifua told the Commonwealth of Learning facilitators and participants that the births of albinos is on the increase, while epilepsies and mental disorder in persons is re-occurring in the forest zone from Fosung village to Becheti in Wabane sub division. It is feared that the problems would spread to other areas of Lebialem if research is not carried out immediately to find out the causes of the health problems and arrest the situation before it becomes late.
The Commonwealth of Learning Cameroon Link Liaison, James Achanyi-Fontem, used the opportunity to speak on the importance of breastfeeding, considering the low rate in most villages. He handed prizes for the health quiz organized during the Cameroon Youth Week(4-11 February) and the International Women’s Day (8 March) activities in Lebialem.
The prizes worth CFA 50.000 to CFA 10.000, exercise books and pens were distributed to the first three best radio scripts writers. Two students of the Government Technical College in Menji presented a radio script on how to prevent Cholera and won the first prize. Other wrote scripts on how to promote mother and child health care amongst youths. The winners were given the opportunity to talk on what motivated them to write the scripts and how they were developed. Most of the scripts were centered on the promotion of gender equity with communities.
Other scripts were on HIV and traditional healing, the prevention of unwanted pregnancies in colleges, and the disadvantages of teenage early sex relationship. The winning scripts were written by Agendia Terence and Tajoache Zachs of Government Technical College Fontem, Emesong Miriam Alemkia of Government Teacher Training College, Tengongwo Divine and Njifua Joan of Government High School Azi.
During the presentation of papers on selected issues, Anastasia Atabong, who is the secretary general of Fine Forest Foundation Cameroon and Deputy Mayor of Menji Municipal Council lectured on Sickle Cell Disorder awareness, blaming some parents for attributing the disease to witchcraft practice. She explained that sickle cell disorder is hereditary and that it can be prevented by screening before contracting marriages. If two sickle cell patients got married and gave birth to a baby, the child likely to inherit the sickle cell and grow help as sickle cell carriers. The child will be regularly sick Anastasia Atabong said, as she took time to explain how such children are treated within the community with the avoidance of stigmatization.
Diana Mbu, a nurse and mid wife of Azi District Hospital lectured on the different stages of care as far as maternal and child care is concerned. Emphasizing on the mother and child care development chain, she invited men to be more supportive to their partners before, during and after birthing of their babies. Mothers were called upon to respect the immunization appointment days and get their children vaccinated. She added that mothers are counseled in care centers in the division every week.
Peter Monet Otto, a community health worker from Fine Forest Foundation Cameroon advised the participants to adopt a family planning policy as a means of improving on livelihood, explaining that family planning is not just limitation of birth, but child spacing in the context of Cameroon. In some countries and parts of the world, family planning stands for limitation of births.
He emphasized that parents should give birth to children, that they will have the means to bring them up and guarantee their education, nutrition, housing and well being as child rights.
COL Cameroon Link current activities focus on “Mother and Child Health Care” rights as an advocacy channel for behaviour change communication. The radio health programmes produced weekly:
• Continue to challenge trade laws that prioritize profit over access to life-saving possibilities.
• Create women’s leadership and ownership training opportunities within local communities by the establishment of or collaboration with local health area women gender councils and related health taskforces.
• Educate, inform, lobby funding organizations and service providers for the involvement of young persons, especially teen mothers in care and support activities,
• Promote social norm change campaigns through publications, participation in local community radio and television programmes, fostering relationships with media outlets and through well recognized male and female celebrities for the promotion of women and child rights.
• Participate in planning, organizing and broadcasting programmes during UN international and national days with women’s involvement in radio live shows and pre-recorded programmes on Mother and Child Health Care rights.
It is understood that the subject of mother and child health care is very vast and this is the reasons for putting in place a community of learning orientation committee in Menji to discuss and decide on the issues treated during the weekly programmes on Lebialem Community Radio.
From Azi, COL Cameroon Link Partnership strategy will be focusing on Alou sub division during its next outing in June 2011. COL is an intergovernmental organisation created by Commonwealth Heads of Government to encourage the development and sharing of open learning and distance education knowledge, resources and technologies. For more information, click on the following links: www.col.org or http://cameroonlink.info
Posted by Camlink Men's Initiative at 12:57 AM No comments: