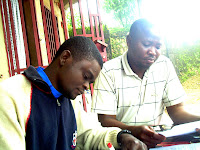 Posted by Camlink Men's Initiative at 2:26 AM 2 comments: 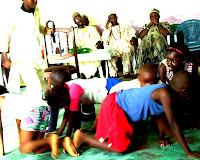 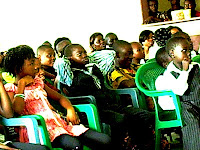 By Celine Asonganyi, Cameroon Link
Email: camlink99@gmail.com
This project was initiated by the Commonwealth of Learning, COL, Cameroon Link Programme, and aims to raise awareness about the importance of proper sanitation and hygiene among school children, teachers, and parents in the outlying areas of Lebialem, in the south west region of Cameroon. The chil-to-child club activities was used as the entry channel for the involvement of young persons in primary schools during the ongoing “Mother and Child Health Care Project” covering three sub divisions of Lebialem.
COL Cameroon Link uses peer education and the formation of sanitation clubs to complement the building of infrastructure, such as latrines and hand-washing facilities.
Communication Strategies
The child-to-child sanitation clubs during the youth week from the 4th – 11th February, use a peer education model in which older youth between the ages of 17 and 24 are trained as facilitators to spread messages about the importance of sanitation and hygiene to school children through various interactive strategies.
These peer educators encourage the formation of child-to-child sanitation clubs and, to date, clubs are operating in over 10 schools, involving about 12,000 students. These clubs are involved in advocating for healthy schools and good hygiene practices, and warning about the dangers of unhygienic environments through participatory methods like song, dance, theatre, and games. For example, children advocated for central refuse collection spots so that they no longer had to share their play spaces with garbage. They also raised awareness on how proper disposal of syringes and other medical material could help prevent the spread of HIV/AIDS.
In addition to raising awareness around sanitation, the clubs aim to provide students with safe after-school activities, as well as leadership skills, and an opportunity to engage in arts and creative media. The project also includes a child-to-child radio programme on Lebialem Community Radio that uses child presenters and supports the objectives of the sanitation clubs.
COL Cameroon Link Partnership Liaison organizing the youth health development activity within child care advocacy, has observed that the sanitation clubs are having an impact on adults in the community as well; this outcome emerges from efforts to establish linkages between Parent-Teacher Associations and communities to ensure that hygiene education skills acquired in school can influence behaviour change at the community level. Children take home the messages of good sanitation and begin to practice these habits at home.
As a result, parents and adults have begun putting pressure on the local authorities to provide better sanitation and hygiene education and services in all schools. According to COL Cameroon Link Partnership Liaison person, James Achanyi-Fontem, the success of the project has prompted inter-school discussions through radio drama competitions among students and teachers about the issues. This COL Cameroon Link initiative has inspired other municipalities to begin fundraising to start the project in their schools.
Development Issues
Health, Children, Youth, Sanitation
Key Points
In 2010, a Cameroon Link study found that 75% of all primary schools in Lebialem had no toilets for boys or girls and no hand-washing facilities. Few schools promoted hygiene, and those that did focused on lectures by teachers with no student participation. The authorities of the ministries of basic education and public health state that an unexpected benefit of the project is that it is allowing girls to stay in school longer and there has been no cholera outbreak in Lebialem as in other parts of Cameroon recently. Previously, many girls would leave school because of the lack of toilet facilities. For the girls existing toilets left them without any privacy. According to the COL Cameroon Link Liaison person, now that child-friendly, separate sanitation facilities for girls and boys have been installed, girls are staying on to complete their basic primary education.
The COL Cameroon Link programme is executed closely with the Ministry of Public Health, Ministry of Education and Lebialem Community Radio as an Open Distance Learning process to see how the sanitation clubs can be replicated in other communities. As part of its national curriculum reform, The government schools of Cameroon have committed 15% of the school term to reflect on local issues. Cameroon Link is pressing for hygiene promotion activities to be part of that 15%.
In 2010, COL Cameroon Link Partnership Liaison introduced Community-Led Total Sanitation (CLTS) in the Commonwealth of Learning (COL) pilot programme in Lebialem as an effort to accelerate the construction of new facilities with support from parent-teacher associations and schools themselves and adequate use of the facilities already available in the schools. This process involves training of 50 people from 10 health districts in May 2011. Cameroon Link has been invited to attend the National Meeting of the Ministry of Public Health annually to present new approaches to more than 50 health education officers and community health organization leaders already in partnership with the health promotion department. This meeting is chaired by the Minister of Public Health, Andre Mama Fouda, who appreciates the new approach and reports to the prime minister who requests other sectors, education colleagues and women’s empowerment , social welfare and youth ministry collaborators to support this approach to accelerate sanitation and stop open defecation in schools and surrounding communities. The CLTS implementation strategy will be presented in a joint COL Cameroon Link planning exercise between district health officials, civil society and non-governmental organisations (NGOs) at a Commonwealth of Learning and Open Distance Learning exchange meeting to be held in Douala in July 2011. Participants will also be briefed on the on-going COL project in Cameroon and the outcome of the last Pan Commonwealth of Learning Forum at Kochi, India of which Cameroon Link was honoured as delegate for the linking media to health and community development training.
Partners
Commonwealth of learning, COL
IBFAN Africa
IBFAN GIFA
Ministry of Public Health
Ministry of Basic Education
Lebialem Community Radio
FECABPA
Posted by Camlink Men's Initiative at 6:50 AM No comments:

By James Achanyi-Fontem, Cameroon
Email: camlink99@gmail.com
The Executive Director of Farm Radio International, Kervin Perkins, has informed its African Partner Organizations that Bill & Melinda Gates Foundation will continue to give support to FRI work in 2011. This information was made known in the FRI Weekly Bulletin of February 2011
To break the news, Kervin Perkins said, 2011 is off to a great start, at a time FRI completed the 42-month African Farm Radio Research Initiative (AFRRI) and was already pulling together reports and spreading the news about what it learned because of the research.
FRI director acknowledged that FRI gathered compelling evidence, for the first time, that participatory radio works and works well! This means that when radio programs feature farmers' voices and perspectives and features practical, sustainable farming practices they are very widely listened to and have a measurable significant impact on farmers' knowledge and most importantly, their practices.
On the strength of these findings and the outstanding work of Farm Radio International's staff in Africa and Ottawa, the Bill & Melinda Gates Foundation has offered a second grant to allow us FRI extend effective farm radio services to more farmers in more countries! The 92nd script package released in late December 2010, focuses on the very important issue of water integrity in Africa.
Farm Radio Weekly, is FRI electronic bulletin of news and information about small scale-farming for African radio broadcasters, and it passed the 1000 African subscriber mark in 2010. To strengthen its ability to serve these rural broadcasters even better, FRI have opened two small news bureaus in Africa - one in Malawi, and one in Burkina Faso. These bureaus are already generating original stories about farming issues for Farm Radio Weekly. Another exciting piece of news is that the 2010 winner of the George Atkins Communication Award, Grace Amito, will visit Canada in March 2011.
Grace is the producer and host of farm radio programs at Mega FM in Northern Uganda. During her travel to Canada, she will meet with and give presentations to friends of Farm Radio International in Ottawa, Toronto, Guelph and Montreal. Friends and donors to Farm Radio International will get hard facts about Africa and the work of FRI during the rounds. Brenda Jackson at brenda@farmradio.org is booking appointments on this eventful trip by our African colleague. If you have any comments, questions or suggestions on how to expand FRI work in Africa, please email Kervin Perkins through kperkins@farmradio.org. For more on Farm radio International work, click on its web site - www.farmradio.org
Posted by Camlink Men's Initiative at 5:22 PM No comments: