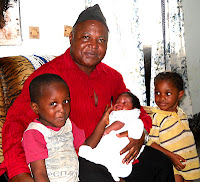 On behalf of Cameroon Link, I would like to wish you all a Happy New Year and I hope your 2012 is off to a great start. The month of January is a time for new beginnings, but it is also a moment when we reflect on the previous year. In 2011, Cameroon Link began exciting new programs with the Commonwealth of Learning, WABA, Farm radio International, Plan Cameroon and the Cameroon Ministry of Public. A review of Cameroon Link's activities sheet was made to meet up with current modern challenges. We lost dear ones, but we also received new faces on board our programmes. At the same time we have reaffirmed our commitment to continue to promote, protect and support mother and child health care advocacy in various ways through community of learning open distance skills training and sharing of experiences.
We are proud of all we achieved in 2011 especially with the reshaping of the Men's Initiative e-newsletter. We could not have done it without the support of all at WABA Secretariat, our partners, national networks, regional networks, donors and people like you, who are passionate about the work we do. In your various countries and regions, there are many ways you can play an active role in changing the world through information, education and support of expectant mothers and lactating mothers. Find out more about SUFI, Community of Learning, Farm Radio and WABA Men’s Initiative campaigns and get creative with your awareness raising activities! Take a chance to inform and engage people on important global infant and young child health issues. Also remember that change doesn't happen on its own. We have to act collectively. When at http://uk.youtube.com/camlink99, click on breastfeeding promotion at the right corner and you will find yourself at"www.waba.org.my" web site.Click on healthy community and you will be at the www.col.org. Know more about Farm Radio International by visiting, www.farmradio.org. Congratulations to our IT specialists for connecting us better every day. We wish that 2012 should open the door for "Peace, Good Health, the achievement of your heart's desires and Happiness!
James Achanyi-Fontem
Coordinator,
WABA Men’s Initiative
Email: camlink99@gmail.com
You Tube: http://uk.youtube.com/camlink99
Online Radio: http://www.spreaker.com/page#!/show/the_camlink_douala_show
Posted by Camlink Men's Initiative at 12:38 PM No comments: 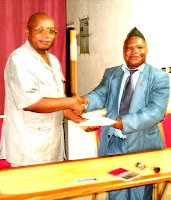 By CAMLINK SUFI
Email: camlink99@gmail.com
Plan Cameroon has signed a Tripartite Protocol Agreement with CAMEROON LINK and BCH Africa Civil Society Organisation (CSO) to implement advocacy and communication activities for behavioural change within the frame work of the fight against malaria in the territory of the Health District of Bonassama. Cameroon entered into an agreement with the World Bank Fund for the fight against AIDS, Tuberculosis and Malaria to implement a 5-year project: “Scaling up Malaria Control for Impact in Cameroon (SUFI) 2011-2015”. Famari BARRO signed on behalf of Plan Cameroon, Kondji Konji Dominique signed on behalf of BCH Africa and James Achanyi-Fontem endorsed the agreement on behalf of Cameroon Link CSO.
The project is structured according to the “Dual Track”, model with the Cameroon Ministry of Public Health as the Principal Recipient 1 (PR1) and Plan Cameroon as Principal Recipient 2 (PR2). Three other sub recipients (SR) are ACMS, IRESCO and MC-CCAM. Plan Cameroon is responsible for the implementation of the advocacy and communication package for behavioural change in collaboration with its two sub-recipients which are IRESCO, MC-CCAM and the civil society organisations (OSC) at the regional level, Health Districts level and the Community Based Organizations (CBO) at the health area level. 10 CSO in ten regions of Cameroon, 179 CSO in Health Districts and 15.500 CBO Health areas of Cameroon are concerned with the implementation of SUFI project.
Within the framework of the project implementation calendar, Plan Cameroon, in its capacity as Principal Recipient has entrusted CAMEROON LINK with the responsibility to take part and follow up the implementation of the activities of the Round 9 SUFI Project in its capacity as representative of the civil society organisation selected in the Health District of Bonassama to ensure that the interests of the populations are taken into account and that they are involved in the adaptation of the activities for the fight against malaria to the realities of individual capacities and communities.
CAMEROON LINK has engaged to implement the project as presented in the chronogram of Plan Cameroon. It would be recalled that Plan Cameroon places the protection of the Child at the centre of its concerns and CAMEROON LINK is conforming to the same policy of child rights as presented in the agreement.
The signed protocol agreement on 25th January,has been concluded to cover a period of 12 months from January 1, 2012 to December 31, 2012 and It could be renewed on the basis of a positive evaluation of the performance of the activities carried out by CAMEROON LINK. Plan will put at the disposal of CAMEROON LINK, all the necessary documents and information tools for the good execution of the activities of SUFI in the Health District of Bonassama through BCH-AFRICA, which was selected as the regional civil society organisation to supervise activities in the Littoral region of Cameroon. BCH-AFRICA will also support CAMEROON LINK in facilitation where need would arise.
Posted by Camlink Men's Initiative at 7:58 AM No comments:

FROM JULY 2011 TO DECEMMBER 2011
By Asifiwe Chanafi, Focal Person
1. INTRODUCTION
Ilembula Lutheran Hospital is a Faith based Health facility. It is owned by the Evangelical Lutheran Church of Tanzania Southern Diocese. The Hospital is situated southwest of Makambako town, Njombe District in Iringa Region. It is 5km South-East of Mbeya –Dar es Salaam tarmac road. The Hospital deals with the provision of Health services to the community. Due to increase in complicated and chronic illnesses the group of people who are working with Ilembula Lutheran Hospital have established the Program named CTC under the organisation umbrella. The Program has existed for six years since 2006 when it was established.

2. ORIENTATION.
Orientation to Hospital leaders, CTC and Hospital staff was conducted as it was planed.

3.PROVISION FOR NUTRITION EDUCATION SESSIONS TO GROUPS OF PLHIV ATTENDING CTC FROM JULY TO DECEMBER 2011
In July 2011 when we started to implement the Nutritional Education Sessions the CTC had the patients 3,191 patients were from June 30,2011 at Ilembula CTC.Among of them 1,836 were female and 1355 were males, whereby in December the clinic had 4,383The average of patients received knowledge on Nutrition were 1014 (31.2% from the total patients).
3.1. TOPICS TAUGHT:
3.1.1. Elimu ya Msingi ya chakula na lishe.
 Nini maana ya chakula
 Umuhimu wa chakula kwa binadamu
 Virutubishi,umuhimu na vyanzo vyake.
 Makundi ya vyakula.
These topics were taught in July 2011. Total patents attended were 894.

3.2. FACILITATORS
All facilitators who were attended a seminar which was conducted by the COUNSENTH AND TUNAJALI participated fully in implementation.
3.2.1. Asifiwe Chanafi
3.2.2. Apia Ndelele
3.2.3. Aristides Mtega
3.2.4. Julia Njako
4. CHALLENGES:
4.1. Lack of practical demonstration materials.
4.2. Unavailability of room for seminars, practical and demonstration.
4.3.Lack of fund for purchasing materials for practical/demonstration, stationary, brochures and Problems
4.4. Inadequate of CTC staff.
5. WAY FORWARD
5.1. Let us work together for finding solutions of those weaknesses so as to fulfill the demand in implementation of our activities for better health of PLHIV.
5.2. More seminars for refreshments are needed to those who attended seminar.
This information has been brought to your, so you can extend a hand to the needy cared by Chanafi. For more information, click on the following links:
http://www.spreaker.com/page#!/show/the_camlink_douala_show
http://uk.youtube.com/camlink99/
http://cameroonlink.info
Posted by Camlink Men's Initiative at 2:34 PM No comments: