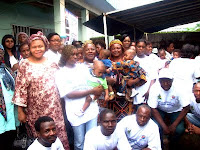 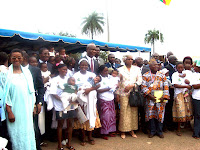 The above is the caption attributed to an advocacy article published in Cameroon Tribune national daily of Tuesday, August 18, 2009 edition by Martin Nkematabong. In Cameroon, the breastfeeding rate remains as low as 24 per cent the newspaper informed its readers. This is how Martin Nkematabong narrated the advocacy story:
“The World Breastfeeding Week crusade kicked off in some 120 countries across the globe since August 1st under the theme <
Posted by Camlink Men's Initiative at 11:30 AM No comments: 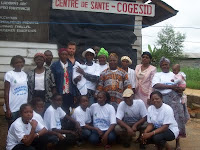 European Volunteers Support Cameroon Link Code Monitoring Campaign During WBW 2009 In Douala
Tobias Zick of the German Neon Magazine in Munchen and Per-Anders Pettersson, Swedish Freelance Photographer based in South Africa joined the Cameroon Link team in Douala to assist in the execution of the world breastfeeding week action plan 2009.
The volunteers visited the Bamenda, North West highlands to witness how illegal milk market competition by companies was affecting breeders in Cameroon, who are facing problems with the distribution of their fresh cow milk collected in the region.
Both Tobias and Per-Anders accompanied Cameroon Link in its journey from health area to health area in Bonendale, Bonamikano, Ngwele and Grand Hangar in the Douala city neighbour, before swiftly witnessing the company violations at the Bonassama District Hospital in Bonaberi and CEBEC Protestant Hospital in Sodiko-Douala.
As Cameroon Link and partner network associations like COGESID Mambanda, COGESID Bonamikano and ASSF Ngwele echoed messages relevant to the theme of the world breastfeeding week 2009 during educative talks within their communities and calling on the population to join in campaign for protection, promotion and support of breastfeeding during emergencies, Tobias Zick from Germany and Per-Anders Pettersson of Swedish origin conducted interviews on the strategies put in place by the company violators of the international and national Code.
In Bamenda, they had collected information on the consequences of European milk powder dumping. Tobias was interested particularly about the extent to which imported milk powders distort market chances for farmers in Cameroon, while documenting recent examples of baby food marketing malpractices, especially breastmilk substitute distribution in hospitals and other health facilities.
On the August 6, the date of the arrival of the European volunteers. The president of the Federation of Cameroon Breastfeeding Promotion Associations, FECABPA, James Achanyi-Fontem, had called on the government to strengthen Cameroon’s national code on the marketing of breastmilk substitutes by including sanctions as part of the already well formulated articles during the launching mass event in Obala.
Achanyi-Fontem told the story of the birth of federation on the 14th September 2007 and its vision which is to protect, promote and support breastfeeding action with health facilities and communities of Cameroon. He added that FECABPA was out to advocate for human rights, maternal and child care with the aim of promoting the well being of the mothers and children.
The President of FECABPA thanked the minister of public health for sponsoring the training of 30 breastfeeding counsellors in November 2008 and that the NGOs were already well armed for the acceleration of partnership with the government in the area of infant and young child feeding.
The FECABPA president said, though much had been achieved, there is still much to be done for Cameroon to qualify for certification of at least one Baby Friendly Hospital or a Baby Friendly Community. More educative materials are needed for the expansion of community social mobilisation for the protection, promotion and support of breastfeeding.
He used the opportunity of the WBW 2009 launching in Obala to publicly present the Gold Medal won by Cameroon following the 2008 WABA WBW marathon events competition, while inviting the ministry of public health and UNICEF to support the participation of the Cameroon delegation at the forth coming WABA Global Forum 3 scheduled in Quebec, Canada from the 14th -17th June 2010. The theme of the WABA Global Forum 3 is “Innocenti & Beyond: Breastfeeding in a Family-Friendly World”.
FECABPA also recommended that the government should urgently put in place a National Code Monitoring Committee, that would suggest punitive measures including business closure, suspension of license or financial penalty for damages caused due to illegal market competition by any company violators of the existing national code. With this, FECABPA suggests that sanctions be included as part of the existing Cameroon National Code on the marketing of breastmilk substitutes to strengthen its well formulated articles and encourage effective monitoring strategies that would enforce its application at all levels in the country.
For more information on the world breastfeeding week, click on the following link or copy and paste – www.worldbreastfeedingweek.org
Posted by Camlink Men's Initiative at 11:37 AM No comments: